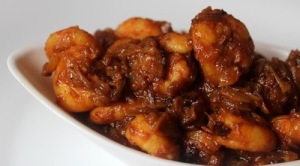 Prawns Masala: Prawns masala is simple yet delicious and packed with flavor. The ingredient which goes in making this prawns masala recipe could be easily found in your kitchen. The recipe involves two ‘steps’ – marinating the prawns and preparing the gravy. Prawns masala goes really well with hot, freshly made chapattis (unleavened Indian flatbread) or plain or jeera rice.

Note: Do not over-fry the prawns as they will cook some more in the gravy and over-cooking prawns makes them hard/ un-palatable.

If you have any queries regarding the Prawns Masala recipe, please leave a comment.

Based on 1 Review(s)
Posted in MAIN COURSE, NON-VEGETARIAN